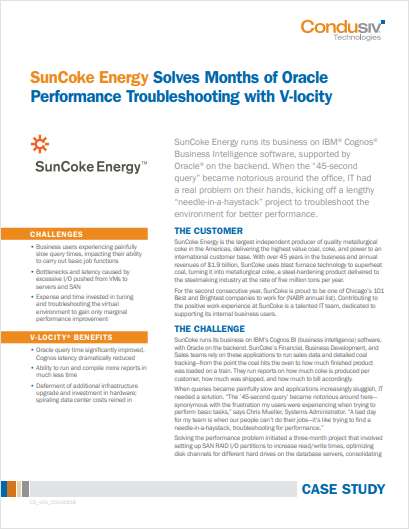 When SunCoke's “45-second query” became notorious around the office, IT had a real problem on their hands, kicking off a lengthy “needle-in-a-haystack” project to troubleshoot the environment for better performance.

When queries became painfully slow and applications increasingly sluggish, IT needed a solution. “The ’45-second query’ became notorious around here— synonymous with the frustration my users were experiencing when trying to perform basic tasks,” says Chris Mueller, Systems Administrator. “A bad day for my team is when our people can’t do their jobs—it’s like trying to find a needle-in-a-haystack, troubleshooting for performance.”

Solving the performance problem initiated a three-month project that involved setting up SAN RAID I/O partitions to increase read/write times, optimizing disk channels for different hard drives on the database servers, consolidating all VMs, upgrading the server network from 1GB to 10GB, dedicating RAM and CPU to each Cognos server, and upgrading the Dell EqualLogic SAN to EMC VNX technology. “After all that, the infamous 45-second query went down to 25 seconds, which was nice, but not good enough,” explains Chris. “That’s when we brought in V-locity and it knocked the door down.”

“We rolled out V-locity on all the Cognos VMs, ran the same query, and got the time down to 15 seconds instantaneously,” he explains. “I wish we had V-locity sooner—it would have saved massive effort and solved our problems much earlier in the process.”

By deploying V-locity, SunCoke has reined in spiraling data center costs, delivered high performance to their users, and dramatically reduced backup time—driving greater value from the hardware and infrastructure they already have.

Open Now
Why Remote Access Should Be a Collaboration Between Network &...